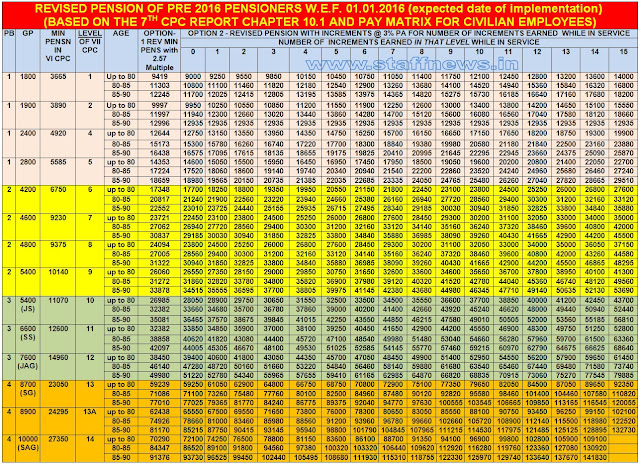 NOTE: Based on the recommendations of 7th CPC vide Para 10.1.67 of its Report, an ALL-IN ONE table for pension has been prepared from where the likely pension can be determined easily.
· The table covers all the 5th CPC scales from S 4 to S 29 (except S 6) grouped in 4 PBs after 6th CPC. These have been assigned Levels 1 to 14 in the matrix table by 7th CPC.
· The table also gives pension for pensioners falling in 3 age groups i.e. upto 80 years and with additional pension @ 20% and 30% after the age of 80 and 85 respectively.
· Since the pension as per option 2 may take time, the pension as per option 1 (with a factor of 2.57) may be paid in the first instance as an interim measure.
· Pension as per option-1 is to be calculated on the basis of pension as fixed after 6th CPC. This being different for pensioners retiring from the same scale, the figures in the table under option -1 are according to the minimum revised basic pension as per DOP OM dated 30-7-2015. The Pension is to be finally fixed at the higher of the two Options.
· In some levels like levels 6, 10, 11, 12, 13 and 14, there is no common min revised pension as per 6th CPC (differing with each scale though GP is same). The table can accommodate only one figure. Therefore, in such cases lowest of the figure has been taken as representative of the respective level.
Compiled by  N.P . MOHAN C.E (Retd.) Railways & President RSCWS